Origins and Research on Sound Healing

Natural observation shows us that our bodies are acutely sensitive to noise, and sounds certainly have an influence on our moods and behavior. Anyone who listens to music can state that sounds play an important part in our emotional lives. Music can make us feel happy, relaxed, energized or even facilitate healing, but how does it all work? In the following paragraphs, you’ll get a few answers: 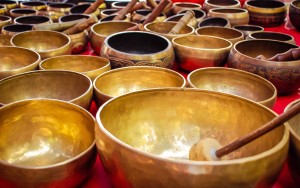 For centuries, from ancient Greeks to Native American medicine men, shamans etc., music has been used in healing practices. The first known culture to heal with sound is the Aboriginal people of Australia. Their wind instrument called “didgeridoo” has been used as a healing tool for at least 40,000 years. The Aborigines uses it to heal broken bones, muscle tears and illness of every kind. Sound vibration healing is also well known in yogic traditions with the use of “bija” which relates to mystical “seed syllables” contained within mantras (healing prayers). As well, in Chinese Qigong (or Qi Gong), specific mantras, chants and sounds are used to stimulate specific organ systems in the body. Tibetans are also well-known for the use of their healing singing bowls (also known as: rin gongs, Himalayan bowls or suzu gongs – see picture). Today, Sound Healing is increasingly embraced as the oldest, most gentle and most profound method of healing that exists.

Sound healing had almost disappeared in our Western world until the 1930s when acoustic researchers discovered ultrasound and its medical properties. Music therapy as we know it really expanded in the 1940s with the French otolaryngologist: Dr. Alfred A. Tomatis. While conducting his research, Dr. Tomatis discovered a way to rehabilitate people with damaged hearing by playing the sounds they could no longer hear using an electronic device that stimulated the muscles of the inner ear. In the course of his studies, Dr. Tomatis discovered that the same type of sound therapy could be used to treat a variety of disorders including dyslexia, learning disabilities, attention deficit disorders, autism, and sensory processing and motor-skill difficulties. The Tomatis Method is also claimed to have helped adults fight depression, learn foreign languages faster, develop better communication skills, and improve both creativity and on-the-job performance. It’s also interesting to note that the Tomatis Method uses recordings by Mozart who tuned his music to 432 hz, and Gregorian chants originally embedding the mystical Solfeggio frequencies (528 Hz…).

If you want to find the secrets of the Universe, think in terms of energy, frequency and vibration.

Scientists found out that our Universe is created through patterns of frequency. Just like electrons which are constantly moving and vibrating, everything that exists in the physical, mental, emotional and spiritual realm does so on a vibratory basis. From this observation, researchers have demonstrated that the appropriate use of sound/frequency can have therapeutic benefits that go far beyond the ability to alter our moods. Today, Sound Therapy, using the right frequencies in the right combinations, is proven to be an effective form of treatment for a number of disorders: insomnia, stress, attention deficit disorder, various immune system issues, emotional disorders etc. Yes, sound can heal our body and mind!

Vibration underpins all matter in the Universe; no matter can exist without sound and vibration. Although invisible, sound is actually highly structured. Cymatics is the study of sound and vibration made visible. Typically, a sound can be visualized through a particular medium such as water, air or sand. Today, scientists are also using what is called a “Cymascope”. It is a scientifically designed unit that reveals the geometry within sound. Studies in this field show that harmony exists at all levels in the Universe and a coherent relationship exists between the sound of a star, a single cell, a human heart beat and the harmonious sounds from a musical instrument. In fact, the visual geometry of these sounds reveals that many of them contain identical ratios, notably Phi, often referred to as the Golden ratio (1 to 1.618…) or “divine proportion”. In nature, things are not assembled in a randomly or chaotic way…

Beside, Cymatics shows that sound frequencies can directly alter the vibration of matter with particles adjusting to different frequencies. And according to Japanese Dr. Masaru Emoto’s experiments on water memory, human vibrational energy, thoughts, words, ideas and music affect the molecular structure of water and can dramatically shape the way water crystallizes. Knowing for a fact that we are constituted of 65% of water on average, we can expect musical frequencies to alter our own vibrational state. And it’s worth noting that Dr. Emoto was an active supporter of the 528 Hz Solfeggio frequency and its healing power.

Globally, every expression through sounds, emotions or thoughts holds a specific vibrational frequency which can influence everything around!

The Science Behind Healing with Sound
28 de junho de 2019